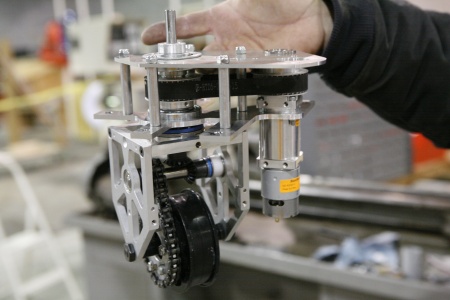 Ran a Value Engineering session on the 2010 Pivot Drive.

Based on feedback to the "Straw man" proposal on 22-November, an improved "Wooden Man" (pdf) design was developed to elicit further critique.

Note that <G19> in The Game RevA appears to clearly rule out "the Strongman" Minibot strategy. 12 Jan 2011, Clem

The (second iteration of the) "end" result of our design process is highlighted in the DEWBOT VII Design Highlights Handout (Philadelphia revision). 5 April 2011, Siri

There's also a half-page version of this document for mass distribution to teams. 7 April 2011, Siri

Email to Programming Team: Last year, angle sensor orientation and wheel orientation were arbitrary. We dealt with this by installing a custom potentiometer panel which allowed a correction bias to be set to align the wheels.
Since our 2011 pivots will be modular, I propose that we calibrate the sensor to the wheel during assembly. Sensor output would then be fixed versus wheel angle relative to the pivot module. Since each installed pivot module has a specific orientation within the robot chassis, the sensor output would also be fixed versus wheel angle relative to the robot chassis as well (although not identical for all pivots). The need for on-robot pivot angle calibration should thereby be eliminated.
Regards, Clem (15-Jan)

Email from Clem (1/24): I've adapted my 2008 robot drive-train model to the problem of FRC's 2011 MiniBot race. Model and some sample results are attached. I am not sure that all physical parameters (normal force on wheels to the pole, coefficients of friction,...) are correct. The model and results are provided as samples of what a model can provide.
I used a 0.5:1 gear reduction for the sample cases. I assumed 10 lb normal force holding the minibot to the pole and high-friction wheel surfaces (probably not so realistic).
I ran the cases for 4.5, 5.0 & 5.5 lb robots. Wheel radius was varied between 1.5 and 2.3 in in 0.1 in steps.
The primary factor affecting climb time is minibot mass. No big surprise here. The lighter, the faster.
However, wheel radius (a.k.a. gear ratio) plays a significant role and there is an optimum which is a function of robot mass. Given that we have fixed geal ratios (based on the Tetrix gears), the ability to turn a custom-radius wheel could provide a useful competitive advantage. Optimizing wheel diameter/gear ratio can cut tenths of a second off the climb time.
So, to win the Minibot race:
1. Minimize Minibot mass (seconds to be saved here)
2. Deploy quickly
3. Optimize wheel diameter/gear ratio (tenths of seconds to be saved)
Regards, Clem

The effects or minibot mass and drive wheel radius was explored in detail - 31 Jan 2011, Clem