DEWBOT VI's bumpers are the first to be pre-designed in CAD (AutoDesk Inventor). Thus, it's also the first year in which our bumpers fit when we first put them on. As with DEWBOT V, they are attached by easy-access wingnuts and take a grand total of 25 seconds to remove and roughly 40 second to attach. You can see the bolts sticking up from the bumper as they are being assembled. 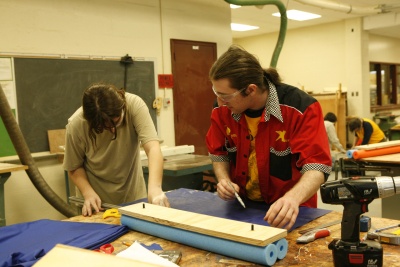 The picture below shows the mounting points inside the robot. You can see the wingnuts holding the bumper in place. 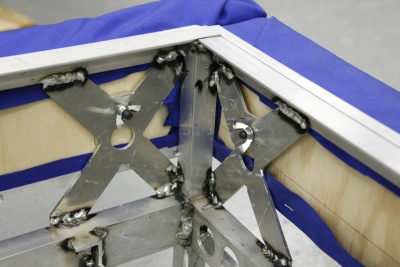 Both sets combined weight 25.89 lbs, well within the FIRST rules which set a maximum of 20lbs each. The "Bumper Master" is Mike Rizzo.

DEWBOT V used the same wing nut design, adapted from Chief Delphi by Siri Maley and instituted by Mike Rizzo. However, they were not pre-designed, took significantly longer to mount initially, and were originally out of regulation.

DEWBOT IV used last-minute addition, virtually inaccessible socket head cap screws, which took roughly an hour to remove and an hour and a half to attach, and proved very difficult at competitions.

DEWBOT III employed quick release pins--or rather, "release pins", or perhaps just "pins"--requiring a rubber mallet and quite a bit of patience. Fortunately bumpers were not mandatory in 2007, and were rarely used.