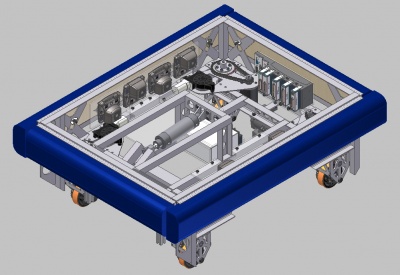 A body of Drawings have been created using AutoDesk Inventor based upon a provisional Pivot Drive design. pdf versions of these drawings are provided below.

In addition, there are a couple useful excel worksheets

Read Over the Hump, an analysis of a proposed Drive-train / Chassis (4-wheel Pivot Drive with 4" wheels and 28" wheelbase) traversing Breakaway's BUMP.

My stream-of-conciousness first-thought slides on Breakaway and DEWBOT VI are posted here.

Fabricated Pivot Parts drawings are available. These take into account both the experience with the prototype and the requirements of Breakaway.

4-Feb design
Clem has written paper State of the Robot that describes where we are at the half way point of the season. From the executive summary:

We’re just past the mid-point of build season. This provides a good opportunity to summarize what the team has achieved, what we’ve yet to do, and where we are going.

Our game strategy for BREAKAWAY is centered on scoring competence with the game’s soccer balls. Our Pivot drive-train will give us the agility we need to quickly approach and line up balls for scoring. Our Kicker will be able to loft balls over bumps and, with the vision system, should score reliably from at least Mid-Field. We will be able to cross bumps and drive through the tunnels to move between zones. DEWBOT VI will not elevate or suspend at the match’s end.

All of DEWBOT VI’s drive-train components and the welded chassis frame are complete. The team will be assembling the drive-train onto the chassis tonight.

The robot control (cRIO) and motor controller (Jaguar) panels are wired and ready to install on the chassis as well. These will go on as soon as the drive-train assembly is complete. Two additional electrical panels are needed for the Power Distribution, controller side-cars, digital relays (Spikes) and solenoids.

We need to get the robot driving so that we can test control code, train drivers and develop tactics.

A kicker has been designed based on prototype testing. Kicker fabrication will start after we have a driving robot.

So at the half way point we are doing well in some areas, and need to finish up in others. We've had a great deal of effort by both students and mentors to get to this point along with super support from our parents. 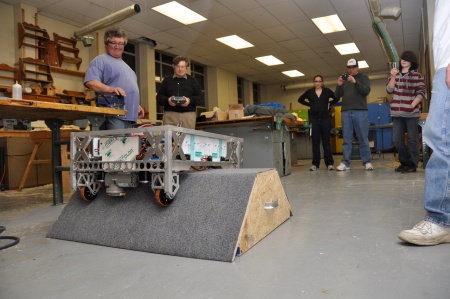 We really did it!
Running the Bump - An analysis of DEWBOT VI climbing the bump in "Landscape" (y) orientation, then pivoting wheels to drive along the bump in "Portrait" (x) direction. This doesn't work.

Over the Hump (reprise) - An updated analysis of DEWBOT VI crossing the bump in "portrait" (x) direction. This analysis includes the current design's Center-of-Mass.

We cut most of the metal for the proxy chassis last evening. We'll start welding after the snow stops.

The DEWBOT VI Bill of Materials is available here.

Read more about the Possessor.

With the improved possessor, there is also a revised DEWBOT VI Bill of Materials for Philadelphia.