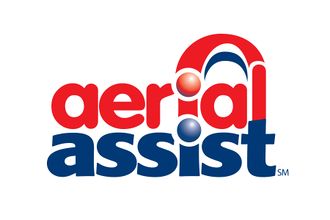 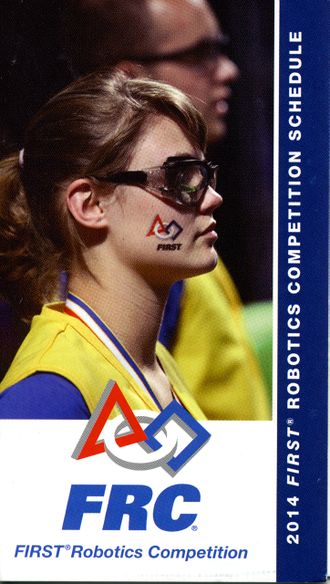 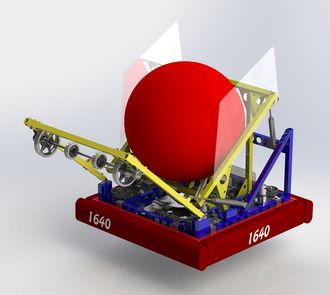 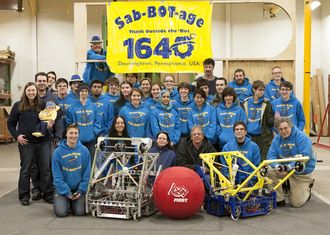 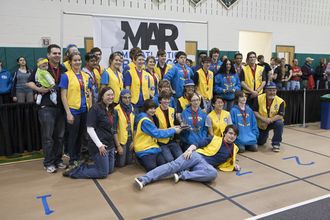 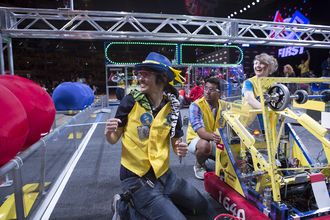 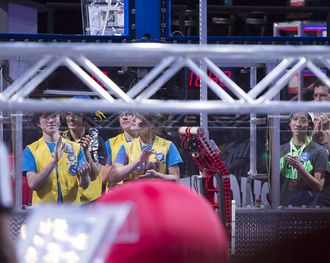 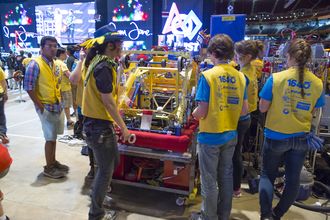 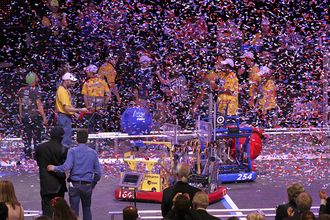 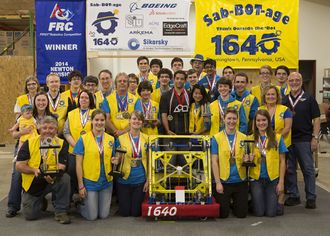 The 2013 Einstein mis-scoring incident got the team riled (without blame to FIRST's handling of the situation, which was entirely fair and appropriate). Immediately after 2013 FRC Championships, and with fire in our bellies, the team set a single, hard goal: Go back to Einstein in 2014 and do it right. Strong words. Tough goal. While there is no way to guarantee that we will even qualify for Championships in 2014, no less find ourselves on Einstein again, this objective will determine our actions from the day it was made through the 2014 competition season.

Can it really be ten years?

I love robotics competitions. Even so, the true raison d'être for FRC is found during build season, not in competition. This is where you learn. Pressure is high. Here you face your biggest challenges, and either overcome them, or are overcome by them. Build season is the lesson; competition is the exam.

Students join our team throughout the year, and most see competitions before build season, especially off-season events. Still, these students are rookies until they have passed through their first build season. Trial by fire.

Or perhaps, trial by ice this year. We were extremely fortunate to lose only four meeting days due to weather this build season. The season saw four major storms, including an ice storm which knocked out power for some people on the team (including Kelloms, Weissmans and McKowns) for five days! Fortunately, the TCHS lost power for only a day and a bit, so only one meeting lost.

Drive Train
Due to the very strong expected defensive nature of Aeriel Assist, and serious bandwidth limitations on our design team, we made the decision on 5-January to utilize DEWBOT IX's Drive Train design (which has been published) with a couple important upgrades.

Ball Handling
The robot employed a very effective Roller Frame to control ball movement. While originally envisioned primarily for the purpose of picking the ball up off of the floor, the finished system performed a wide variety of critical functions.

Shooting
The robot was equipped with an effective 2-trajectory slingshot for shooting Aerial Assist's ball; either over the truss or into the high goal. A load cell driven dynamic winch provided consistent force tensioning of the slingshot.

Design Philosophy
More so than in any past year, the team pursued perfection in executing DEWBOT X's design and construction. This can be best seen in the attention to detail, the modularity and serviceablity of the robot. It is also visible in the repeated renditions of some parts, which we made over until just right.

Hatboro-Horsham - 1 & 2 March-2014
Our performance was seriously compromised by an unanticipated Shooter Failure which was only diagnosed and corrected after the competition. We finished qualifications as 19th seed with a (6-6-0) record. We were the first pick of the 8th alliance, but did not advance past the quarterfinals. We earned just 21 MAR qualifying points at this event.

Lenape - 22 & 23 March-2014
Big turn-around from Hatboro-Horsham! Our detailed analysis of the shooter failure facilitated an effective correction. 1640 finished qualifications at 2nd seed with a (10-2-0) record. Joining the 1st alliance, we finished the event as FINALISTS. The 56 MAR qualifying points earned secured a spot for us a MAR Championships.

MAR Championship - 10-12 April-2014
Another strong performance. Sab-BOT-age completed qualifications as 4th seed with a (9-3-0) record. We lead the 4th alliance and while not advancing past quarterfinals, we earned a spot at the FRC Championship.

Midknight Mayhem - 28-June-2014
Our all-new drive team and pit crew, together with a highly reliable 2-ball high autonomous earned us a 4th seed spot with a (4-1-0) qualification record. We accepted team 869's (Power Cord) invitation to join the 3rd alliance, but were eliminated in a quarterfinals rubber match.

Indiana Robotics Invitational - 18 & 19 July-2014
Held at Lawrence North High School in Indianapolis, Indiana 18 & 19 July-2014. Participation is by invitation only and the level of play is simply awesome. Team Sab-BOT-age has participated in IRI every year since 2010; every year of swerve drive for us.

Duel on the Delaware - 18-October-2014
Held at Salem Community College in Carney's Point, NJ and hosted by teams 365 (Miracle Workerz) and 316 (LuNaTeCs), Sab-BOT-age has participated every year starting 2007.

Ramp Riot - 1-November-2014
Hosted by team 341 (Miss Daisy) at Wissahickon High School in Ambler PA. Team 1640 has participated at Ramp Riot every year of its existence. 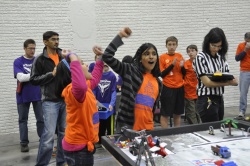 I love it when a plan comes together! 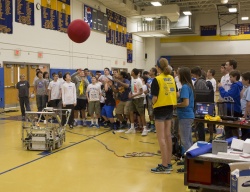 FIRST Demo in Exton Square Mall - 21-December-2013
Together with the MASH family of FTC robots (4077 MASH, 4856 Minnie MASH and 7690 New Mash), FRC 1640 participated in a FIRST demonstration and display at the Exton Square Mall in front of JC Penny's.

Chester County Library Mini Maker Fair - 17-May-2014
DEWBOT X, now temporarily released from the endless drudgery of robotics competition, was able to enjoy some sunshine and play with some younger Chester Countians. A good time was had by all. 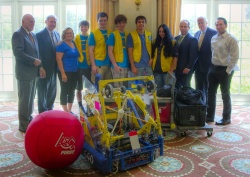 Kiwanis demo
Mentors and students from MOE visited for a detailed review and examination of Sab-BOT-age's swerve technology.

Tippermans run Robot Springboard to teach robotics
For two years, FRC 1640's Hannah and Rachael have run Robot Springboard, bringing robotics, lessons to young students and attracting the attention of the US Secretary of Education, Arne Duncan. Their successful program has had international reach.

DASD School Board Presentation - 13-August-2014
As a consequence of the team's outstanding competitive performance this year, we had the opportunity to present at the Downingtown Area School District's board meeting. While we are no longer affiliated officially with DASD, Sab-BOT-age is a DASD team by birth, and most of our students are from the district. 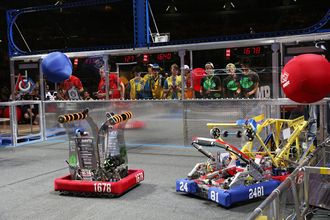 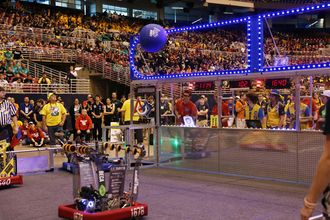 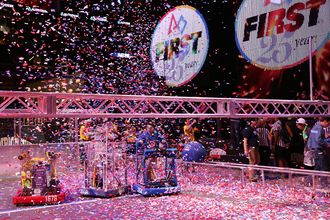 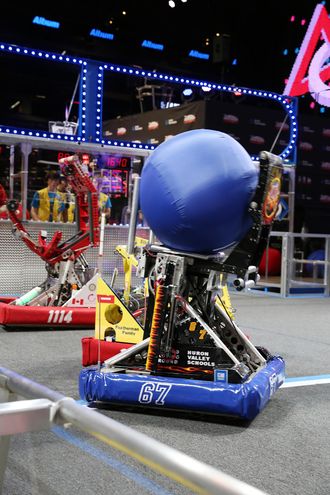 With last year's outstanding competition performance, and the fact that we managed to go a step further this year, the team has received more than the usual amount of media attention. Summarized below, together with the team's media output.

2013 FRC Photo Gallery
Two of the 48 marketing tool photos in FRC's 2013 gallery show DEWBOT IX. One of these ended up in ROBOT Magazine.

2014 Kickoff Video
We're in there as a team, with Mike Rizzo making a separate appearance.

2014 FRC Competition Schedule
Features Kira and Douglas on its cover (see top of this page, right side).

Sponsor Arkema Inc. facebook postings
Arkema placed three pieces on their facebook page during the competition season and an additional piece following our Duel in the Delaware vistory.

2014 FRC Photo Gallery
Five of the 63 marketing tool photos in FRC's 2014 gallery show DEWBOT X and/or our drive team. Four of these shown at right.

Team Sab-BOT-age is what it is only due to the efforts of the people involved. DEWBOT X's success will be in the hands of the students, mentors and parents engaged. The team's very existence is possible only through the gracious generosity of our sponsors.