1640 made two significant changes since Hatboro-Horsham: 1) the swerve Lamprey Encoders have been replaced with our old BI Technologies Magnepot Hall Effect Potentiometer Part # 6127V1A360L.5FS; and 2) the shooter controls have been refined. These improvements made a huge difference. DEWBOT XVII looked really good on the field at Springside Chestnut Hill.

1640 finished qualifications as 1st seed and formed the 1st alliance with teams 341 (Miss Daisy from Wissahickon High School) and 714 (Panthera from Technology High School, Newark NJ). 341 was the 2nd highest scorer after ourselves. We had identified 714 as our first choice for 2nd</pick>. With a field of 28 robots and with our 2nd pick being the 24th alliance assignment, we were thrilled to get our 1st choice. The 1st alliance was a power to be reconned with. The 1st alliance went undefeated through playoffs.

In addition to winning, 1640 received the Industrial Design Award.

Team 1640 earned 73 District Points at Springside Chestnut Hill. Overall we now have 134 District Points, putting us (for the moment) in 1st place in FMA. There are still three District Events pending and this ranking is very likely temporary. 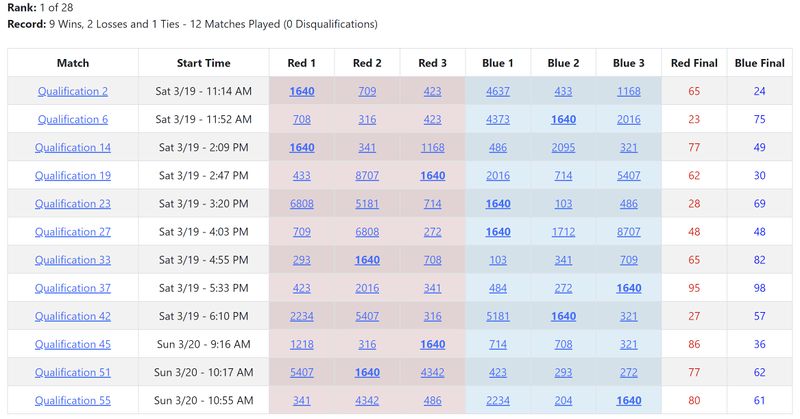 The first Final match was replayed due to field problems.