DEWBOT XV The Road to China

This page is part of a series covering Team 1640's 2019 trip to China as an invited team for the RCC Qianjiang International Robotics Open. Other pages related to our China trip are:

Okay. Technically, there's no "Road to China" insofar as there is no dry land route from Exton PA to the Peoples Republic of China. I get it. I know this. But this page is the child of DEWBOT VI IRI Trip Reports and takes its name from an album of traveling music graciously compiled for this trip by then-Sab-BOT-teur Jennifer Stanton. This 2010 trip to the Indiana Robotics Invitational (IRI) was a game changer for 1640, a team which had just built it's first Swerve Drive robot and had not yet ever won an in-season FRC event. By throwing ourselves in to a competition with the very best FRC teams in the world, we forced ourselves to become a better team. 2010 (first year at IRI) and 2011 (First year at FRC Championships) were transitional years for Sab-BOT-age. So were 2018 and 2019 with 1640's Chairman's Award successes. I see our participation in the RCC Qianjiang International Robotics Open in a similar light.

I invite all students, mentors and parents who participated in this trip either directly or through their efforts to tell their stories below. 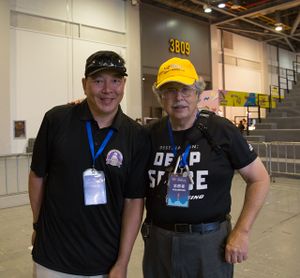 Clem with Hawaiian Kids Mentor Glenn Lee
I have to confess that I am a seasoned China (and World) traveler. This was my 47th trip to China; I've spent about 450 days there. In and around 2003, I managed an engineering project in Qinhuangdao (秦皇岛) in cooperation with a Chinese company. I have a Chinese name, Mài Kāng Wēi (迈康威), courtesy of this Chinese business partner. In 2004, I received the Yanzhao (燕赵) Friendship Award from the Hebei Provincial Government in association with this project. I've travelled extensively within China, including to Suzhou and Hangzhou (albeit visiting both only once in 1995).

This was my 1st non-business trip to China. Also my first with an entourage.

This story really begins on 3-June when I received a facebook message from Howard Cohen: "Hey Clem. How interested would your team be in going to China in July (July 28)?". This was an exciting opportunity, but also a short time horizon. When I brought this to the team's mentors and parents I expected: "Yes, this is a great opportunity, but we can't possibly do this this year". Instead, the response was: "Yes. We will do this!". Wow!

I cannot thank enough the parents who stepped up to organize this complex trip on such short notice. Booking flights, organizing visas, busses to and from airports, etc. This trip was a huge team effort which started long before anyone boarded an airplane. We could not have made this trip without this team effort.

We started the 2019 Suzhou International Youth Robotics Maker Camp inauspiciously: Thor broke the hammer during team selection (in retrospect, of course she did; the hammer involved was certainly no Mjölnir). We ended up paired with team 9047 (Detector) from Shenzhen (深圳). 9047 has a very sophisticated robot which was about 90% mechanically complete but without electronic or pneumatic systems. They were a great team to work with and by the time our three days together had passed, we had a (barely) complete but untested robot. Fortunately, we were both going to the same competition and would have a chance to work with 9047 in working the bugs out.

All of our hotels in China were awesome (Thanks, Min!), but the hotel in Suzhou had the extra benefit of being in a Park ( Egret Park) on Dushu Lake (独墅湖). On the mornings of 28 & 29 July, I took advantage of my early rising bad habits to walk through the park just after sunrise.

I loved the light & water show at the Suzhou Center Mall, but our visit to Pingjiang Road (平江路) on the evening of 29-July was really something special. As an amateur photographer, I was in an extremely target-rich environment! Dinner? Who needs food when there are pictures to take!

On to Hangzhou on the evening of 30-July! Frankly, I saw nothing of Hangzhou except the Convention Center and hotel. I was busy the whole time on robot competition business. This was a great event both for the wonderful teams participating (Chinese and International) and the fact that it pushed several 1640 students out of their comfort zones. Vineeth served as drive team coach and did a great job. Daniel served a Pit Captain. The entire Pit Crew (Daniel, Aerin, Nathan, Divyesh & Joey) faced a huge challenge on 31-July when the shifting gearbox Hab-Lift shaft broke and had to be replaced. Ben filled the role of Human Player. Jacob and others helped 9047 with their robot. I was a robot inspector for the event.

Competitively, we did well, finishing qualifications 11th in a field of 72. The 3rd alliance captain FRC 4613 Barker Redbacks (Sydney Australia) picked us and together we made it to semifinals where we were eliminated by the 2nd alliance, captained by FRC 359 Hawaiian Kids. The Hawaiian Kids' alliance went on to win the event.

I made new friends, including Roy Shmueli and Reuven Stahl from Tel Aviv, Glenn Lee from the Hawaiian Kids, Amanda Yeung from Citrus Circuits and Min Zheng.

We had three great days of sightseeing in Wuyuan county (婺源县), Jiangxi province (江西省) before heading home. This was a new part of China for me; the local dialect is is a Hui dialect (徽语) and Huizhou (徽州) culture and building practices predominate (like in southern Anhui province immediately to the north of Wuyuan). Due to the area's remoteness, many old and traditional buildings still survive. The county is capitalizing on this now to develop a tourist industry.

We visited Sanqingshan (三清山), an impressive granite batholith on 6-August. Very beautiful, but the walk was at the very limits of my physical capabilities. Only 8 miles, but we climbed (and descended) the equivalent of 79-or-so flights of stairs. Tired legs!

I took an embarrassing number of photos on the trip: about 4,700. Some video too.

What an adventure! Its been an incredible experience having this opportunity to attend this workshop, from the incredible sightseeing, to the amazing people I met along the way. In our workshop in SuZhou, I had the wonderful opportunity to work alongside Chinese students discussing, designing, and assembling the robot. I was fortunate enough to speak and understand some Chinese, but the daunting task of talking with native speakers was nowhere near as difficult as I feared heading into the trip. Even with my limited vocabulary, I still loved striking up conversations with my Chinese peers. I learned a lot about their everyday lives, and they were likewise intrigued in my experiences in the United States.

The majority of the students of FRC Team 9047 Detector, the team we had the opportunity to mentor, were quite young. Some were inexperienced, but they were all very curious and eager to jump into robotics. My Chinese peers were very receptive to new information, and loved learning new things. Kei Chan, the team captain of 9047, was an amazing partner and friend. Any problems I had with assembly, or questions I had with the design, I could always go to Kei for some help. I was extremely impressed with his level of dedication and passion, as he was always working on improving the robot.

The RCC Qianjing International Robotics Competition in HangZhou was where both our robot and our rookie team's robot were put to the test. Browsing the Pits before qualifications, I was amazed at the volume of teams who appeared. With a country as large as China, it was amazing to see over 60 Chinese teams come out for an unofficial offseason event.

Our robot performed quite well in competition, thanks to lots of dedicated effort from all students and mentors. As the primary translator of our team, I found myself dragged around quite a bit, whether it be to ask prescouting questions, talk strategy or to talk to scouts from other teams, but I found it quite fun, as I could not only sharpen my Chinese, but I also got to interact and socialize with some Chinese students from across China

The other team we mentored, 9047, faced many more challenges that us. With less time to test the robot, It was difficult to get all of the robot's systems ready to compete. In addition, the driver did not have very much experience behind the driver station, but that is something that even money cannot buy. However, all team members were eager to learn and adapt. In my time mentoring in their pit, I felt they learned alot not only about their robot, but also about how to organize the pit and stay safe while working with the robot. Even if they did not achieve success on the competition field, I sincerely believe they gained lots of experience and knowledge that will greatly help them in future competitions.

All in all, this event was a great learning experience for both me and the team we mentored. After getting to know some of the members better, I am extremely confident that this team has the drive and passion to learn more. Perhaps one day in the future, we will meet again on an official competition field.4

Thanks to all the mentors, students, and parents who made this trip possible. It's been a fantastic experience, and I sincerely hope that we can continue this outreach.