The shipping teams job is simple. Create a robust packing system that will allow the robot to be shipped 2000 miles, get bounced around by forklifts in trucks, get jarred by potholes in the road, re-slammed by forklifts getting unloaded and dropped that all important 12 to the floor at the very end.

Well maybe the job isn't that simple, the final design of the robot isn't complete until late in the build cycle, leaving about two weeks to build the crate or do repairs and build supports from last years crate. Historically the robot gets loaded into the crate at about 2AM. In February. Outside. So the big challenge is assemble the box in the dark, cold night when everyone is very tired.

In the past our crates have done a super job, these are pictures from DEWBOT V being shipped.

Some teams have built crates that the robot is removed and the crate is transformed to a storage and work area. This frees up space in the pit. 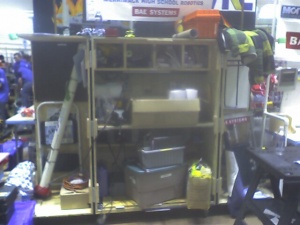 The crate shown has shelves to hold all the tools and an extra deep shelf that sticks out to create a sturdy workbench. One of the plans for the 2009 Fall Season is to construct a multi talented crate. One of the design goals is that the new crate will be reusable for a number of years. Special support inserts for the current robot would be constructed.