Driving issues during early HAVOC matches led us to fully retest our batteries. As the most recent tests were in April, this retesting was due. Our driving problems turned out to be drive-train related, not due to batteries.

All competition-rated batteries were tested 24-26 September using the CBA III (manufactured by Optim Engineering - marketed and sold by West Mountain Radio). The CBA measures the voltage of a battery over time under a fixed current load until a set terminal voltage is reached. For this testing, the load is set to 7.0 amps (should have been 7.5 - this was an exception to standard procedure); terminal voltage to 10.5 volts. The CBA reports Amp Hrs. 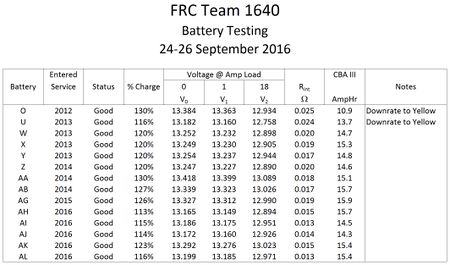 The data collected on the batteries is here (right) and the CBA III performance charts (below): 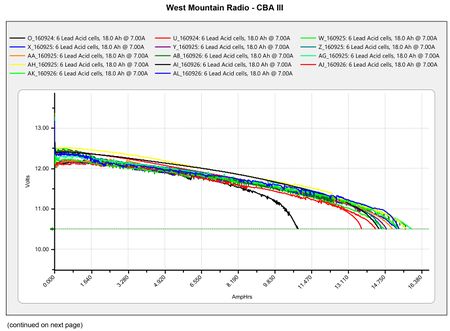 One battery, "O" (our oldest) was found to have sub-par performance. "O" had already been identified as problematic and was not brought to HAVOC, and so did not contribute to problems. In addition, "U" (the next oldest) is beginning to degrade and will be rerated as Yellow (not competition) as well, so as to avoid troubles.

Our last full battery test with the CBA III was conducted in April 2016. Full CBA checks will be run on all competition batteries at least two times per year. The next must be conducted prior to our first 2017 season competition.