The robots that we build are battery powered. The battery is 7.2 volts and supplies about 2000mAh. What this means is the robot does not have a lot of power or an endless supply of power. In the robot design the amount of motors is limited by the rules to a combination of no more than 10 motors and servos. But the battery will not run all 10 of them at the same time. So the design needs to take into consideration how many motors will run at the same time.

Weight is another consideration. Extra metal adds weight. Extra motors add weight. As the weight goes up, the amount of power needed to move the robot goes up. A heavy robot uses most of it's power to move, rather than playing the game. This is one of the reasons we try to design simpler robots, they are lighter, faster and don't end up with power problems.

Each robot team has two battery packs and we charge them between rounds. While one is being used by the robot, the second is on the charger. One of our pit skills is remembering to change the battery and making sure there is one on the charger at all times.

There is also a battery in the transmitter, the charge lasts about 50 minutes. This is enough to play 10 five minute matches. We will charge the transmitter battery during the lunch break to make sure that we have transmitter power for the final rounds. 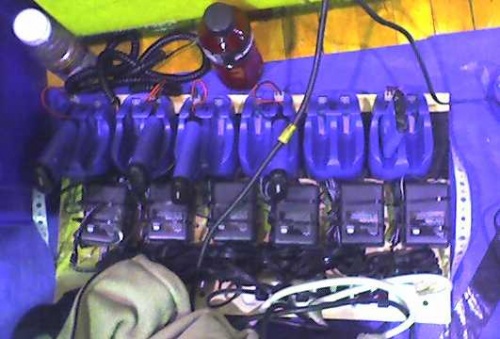 This board has a power strip attached at the lower edge. There are six chargers attached to the board, bricks to the inside, charger supports along the front edge. Along both sides is a pair of handles made out of VEX metal. Rather than each team have only one charger, this allows unused slots to be utilized.

One of our fall 2009 projects is to design a similar board but in plastic container to keep the wires from becoming a hazard.