Difference between revisions of "DEWBOT IX" 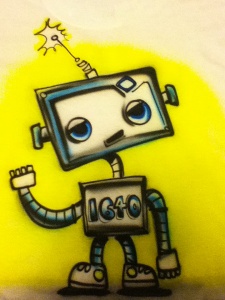 Is this DEWBOT IX?? Will we give up pivot drive for legs? Where do the bumpers attach?

The team hosted its first FIRST event, an FLL tune-up, on 3-November-2012 at Downingtown Middle School.

These moves are definitely not getting any easier with time. 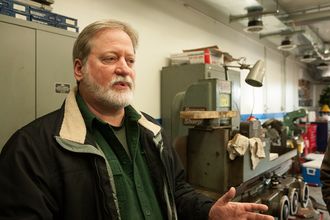 Joe Morganto organized a meeting with FRC Team 3123 WildCogs on 15-December-2012, also attended by Clem McKown. The meeting was set up with the purposes of learning from each other, understanding each others capabilities and how we may help each other, and to establish a basis for collaboration.

As a next step, we will hold a strategy review between the two teams at the end of the first week of build season. We'll be looking for point for cooperative and complimentary design and/or tactics.

We're in the process of selecting a new logo and motto, among other items, to unite around a stronger team brand. We're keeping our name and colors (and our award-winning performance, of course!) to stay recognizable.

Okay. Shop organization has not hitherto been a strong suit for Team 1640. But things change. We spent far too much time looking for things last year.

We built a 6WD chassis as a testbed and a OPFOR robot. Why? Because:

Skill-set, or discipline training and qualifications exist for the purpose of developing skills and knowledge within a specific arena (or discipline). Qualified students are better able to contribute to the robot's design and construction. By the way, you'll likely find these skills useful more generally than just to build DEWBOT IX. Students are allowed and encouraged to qualify in more than one Discipline. Discipline qualifications are mentor-driven, but highly-qualified students may lead training.