Difference between revisions of "DEWBOT VII" 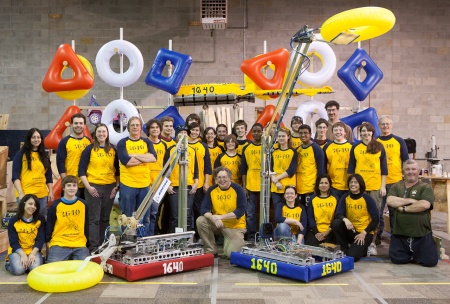 To help meet these goals, the team did a number of things differently this year:

Build season is the heart of the FRC year. It is the 45 days during which the team's students and mentors put their hearts, minds and hands into designing and building a great robot. Paradoxically, the time seems both far too short and much too long.

Starting with a cold January 8th morning and ending up in the middle of an even colder February night. The chronicles of the DEWBOT VII Build season make interesting reading of how we all band together to perform an almost impossible task of designing, building and testing a robot in such a short time frame. Associated with each weeks build are pictures showing happy (and towards the end, tired) roboteers and mentors hard at work. 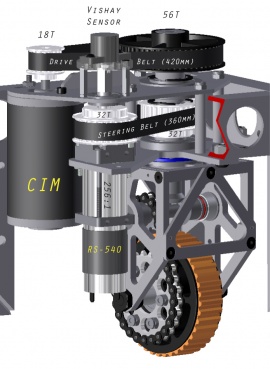 Following an long and animated debate on the evening of January 10th 2011, the team decided to use a Pivot drive-train on DEWBOT VII, rather than 6WD Tank. The final vote was 7 to 2.

Pivot drive provides our drivers with the combination of extraordinary agility and maneuverability with power and traction. It is like combining the best attributes of the two most common FRC drive-trains, Mecanum and 6WD Tank, together in one robot.

The balance is cost and resource management. Sab-BOT-age's Pivot Drive design controls the steering and drive for all four wheels independently through software. This makes for an extremely flexible drive systems (think fly-by-wire), but uses eight motors, eight motor controllers, a fair amount of the cRIO's processing capability, a lot of complex control software and a very large number of precision machined parts. It's not your Grandmother's robot drive-train. The team pioneered this drive-train in 2010, receiving the Xerox Creativity and (BR)2 Engineering Excellence Awards for the design & execution.

In the end, the drivers and programmers were the most persuasive and adamant champions of Pivot Drive. Chief Driver Carly was unwilling to give up a drive-train which provided the team with a critical competitive advantage in 2010 and appeared to offer the same in this year's game. The programming team was equally clear that they were up to the software challenge.

The 2011 Pivot Drive benefits from a Value Engineering program the Team conducted during October & November of last year, and incorporates significant improvements. 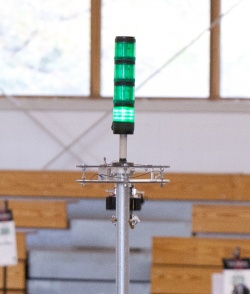 The moment of contact - Mighty Mouse wins another minibot race at Duel on the Delaware
Scoring is defined in the 2011 Game Manual. We made an Excel interface that calculates the autonomous, teleoperated, and minibot race scores to help us determine strategy.

From a mechanical standpoint, there are two distinct scoring systems:

The key strategic imperatives for the mechanical scoring systems were: 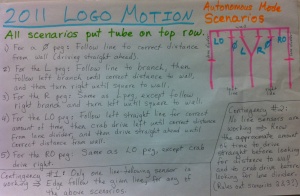 At Finger lakes, DEWBOT VII's mass at reinspection for play-offs was 113.4 lbm (127.5 lbm with Bumpers - 14.2 lbm for the 2nd set of Bumpers - no-one paid attention during initial inspection).

View from the Front, View from the Top - what the field looks like in play, 28 Jan 11
Minibot Deployment Tactics - technical & non-technical minibot deployment considerations, 23 Jan 11
Strategic Analysis - potential strategies as well as what others are likely to do, 27 Feb 11

6-November-2010. Very helpful and educational. Our thanks to the BAA for their gracious invitation. (6) attended from 1640.

In November, Downingtown Area Robotics moved from the Micklen Building into a 17,000 ft2 warehouse at 320 Boot Road, Downingtown. This is a great space for robotics, allowing a full-scale practice field. Alas, no sense of permanence. Our 6th home (and by-far very best to-date).

Team 1640 conducted a Practice Kick-off on 11 & 12-December 2010 in preparation of the real deal. A formal Design Process was introduced 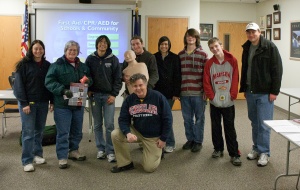 CPR Training
and tested during this exercise. 2006 Aim High game rules were employed for the robot basis, with the exception of the control system, which utilized 2010 standards.

As always, the most difficult part of strategic decision making was in deciding which options not to pursue. Need to work on this.

The team had a rough start, with some cRIO problems which took a while to resolve. In the end, however, we were selected for the 4th alliance and made it to the semifinals. We were defeated by the 1st alliance, who went on to win the Regional.

We scored reasonably well in teleop, up to 4 logo pieces per match and always in the desired positions, but clearly could use more practice. There are mechanical and programming issues to resolve prior to the Philadelphia Regional as well. 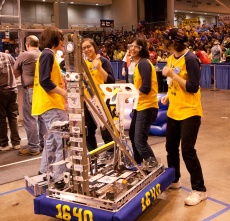 We had a great Alliance! Our Alliance Partners Teams 365 (Miracle Workerz), 303 (Panther Robotics) and 2607 (Robo-Vikings, who substituted for 365 after their robot died in the Finals) performed superbly throughout the playoffs.

Team 1640 did well, winning 6 and losing 4 of our qualifying matches to place 27th out of the 88 teams in Archimedes division. Our drive team was able to score a solid 4 tubes during teleoperated play (except for extreme circumstances) and our minibot (Mighty Mouse) was 100% reliable and always placed either 1st or 2nd in the critical end-game (when deployed). Autonomous performance, alas, was not reliable. We were not selected for an eliminations alliance.

Move out of Downingtown Robotics Center - 2nd week May

We bid a sad farewell to the Downingtown Robotics Center. Many thanks to the Downingtown Area School District for graciously providing this space to the team during the 2011 build season and for its support over the past 7 years. Alas, the team is homeless for the time being.

Team sab-BOT-age returned to IRI with DEWBOT VII. Match performance was off due to our need to train a new driver in-situ, but we still had fun and learned. For the impatient, go straight to the Photo Gallery.

On 13-August-2011, we moved into Waterloo Gardens 427 Creamery Way Warehouse. While we expect this stay to be temporary, Wateroo Garden's gracious donation enables us to train a drive team, work on DEWBOT VII, conduct student training and stage for competition. Thanks for the space!

Julie Christopher graciously hosted an i.am.FIRST viewing party on the evening of 14-Aug. The evening started with a pot-luck supper before the viewing. Great company and a great time had by all. 19 participants (Students, Mentors & Family). Thanks, Julie - this was genius!

Duel on the Delaware 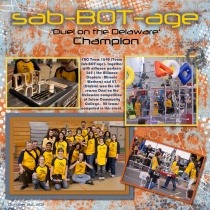 Despite finishing qualifications at 19th out of 28 teams, 4th-ranked team 365 (Miracle Workerz) seelected us as their first alliance selection, filling out the alliance with team 87. Our alliance went on to win Duel on the Delaware this year.

Our robot, DEWBOT VII, performed well and reliably though the competition, with a tread replacement being the only significant repair necessary. We were a solid scorer. Our mini-bot (Mighty Mouse) system generally won the end game. On the two occassions when we played defense, we were the defending robot you just couldn't get around. Our scouting is really showing the benefit of the focus we've put on it. Autonomous remains our weak point.

12-November-2011. Due to a late drop-out, FRC Team 1640 had the opportunity to field two robots at Ramp Riot. DEWBOT VII Prime, our competition robot was fielded under the 1640 number by our first drive team. Deux entered the competition under the nom de guerre 1641 operated by drive-team trainees, giving them invaluable competition driving experience. We also ran two pits, providing training in this area as well.

This is the first time Sab-BOT-age had ever run two robots in a competition and thanks go out to all those who worked so hard to bring Deux from arm-less engineering test bed up to competition condition in the space of one short week.

1640 was selected by the 3rd alliance, comprising teams 103 (Cybersonics) and 365 (Miracle Workerz). A terrific alliance. We won the quarterfinals and our first semifinal match. Alas, 1640's minibot deployment was unreliable throughout the day and 103 broke down in the 2nd semifinal match. As a result of these two factors, our alliance was defeated by the 1st alliance (2016, 222, 1403), who went on to become champions.

By a bizzare twist, 1641 was brought into the finals as a replacement robot for 2607. We lost, but ended up as Ramp Riot Finalist.

1640 has participated in Ramp Riot every year since the team's inception, making this our 7th Ramp Riot.

DAR hosted an Open House on the evening of 15-December.

Team Sab-BOT-age is what it is only due to the efforts of the people involved. DEWBOT VII's success will be in the hands of the students, mentors and parents engaged. The team's very existence is possible only through the gracious generosity of our sponsors.