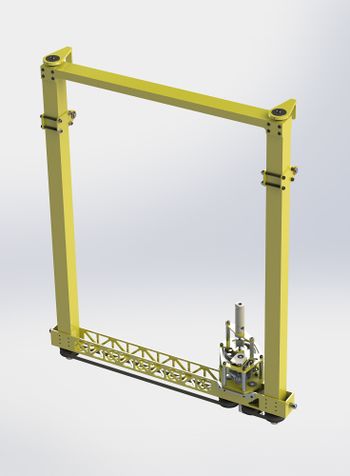 Leadscrews have the significant advantage of not backdriving under load without power. At the same time, they are easily driven by hand in order to facilitate easy removal of the robot from the switch after a match.

The gearbox has two output shafts each with a 28t HTD5 pulley; one for the right side extension and the other for the left side. The two output shafts rotate in the same direction, allowing normal right-hand leadscrews to be used for both extensions. Power is transmitted from these to 28t HTD5 pulleys on each of the leadscrews using 9mm wide belts: 205t on the left; 52t on the right. The leadscrews can be driven by hand using the 205t belt.

DEWBOT's climber deploys pneumatically and extends a pair of hooks via leadscrews. A shifting gearbox allows fast extension together with the power needed to lift the robot off the playing field. By using leadscrews, backdriving after game's end is avoided.