Difference between revisions of "News"

Mentor Siri Maley was named a Selected Research Scholar of the Year (Africana) for her peer-review published work on the engineering design process curriculum in Penn State's Humanitarian Engineering and Social Entrepreneurship Program. Siri's also been a teaching intern for engineering design and a Kenya changeagent for Penn State; she is a 1640 alumna (Captain, '08-09 seasons) and serves as the field coach and co-lead engineering design mentor for 1640.

Many thanks to 225 for selecting us. Man, we worked well together!

The 2013-2014 FIRST Tech Challenge game, Block Party! was unvieled. This is an enormously rich game of strategy. Watch game animation. The kickoff was hosted by the CCIU TCHS!

Participation in either our high school FRC or middle school FTC program will be tailored to allow the fulfillment of the BSA robotics merit badge requirements.

For the 4th consecutive year, we participated in the exclusive Indiana Robotics Invitational in Indianapolis.

1640 after MidKnight Mayhem
Together with 11 (alliance captain MORT) and 2495 (Hornets), we were Finalists at the inaugural MidKnight Mathem off-season competition. We'd been looking forward to working with MORT for a long time and the experience was even better than expected! Congratulations to winners 225, 316, 369 & 869.

The International Council on Systems Engineering (INCOSE) had their International Symposium in Philadelphia this year and graciously set aside a booth for Youth Activities: FRC. The invitation came through Alan Ostrow of FRC team 341 (Miss Daisy); 341, 1640 and FRC Team 1218 (Vulcan Robotics) each took a day of the symposium to spread the word about FIRST, and show off cool robots as well.

1640 alumnae Amber McKown (DEHS class of '08) and Heather McKown (DEHS '09) received their Bachelors of Science degrees from Rensselaer Polytechnic Institute in Computer Science & Biomechanical Engineering, and in Mechanical Engineering, respectively. Amber & Heather joined the team during the lead-up to the 2006 (DEWBOT II) build season, and brought some collateral along.

Our first off-season and dedicated to training; especially driver training, but prospective coaches, operators and human players were able to try their hand as well. We finished qualification rounds 6th seed out of 42 teams participating.

On to Einstein Field! 1640's first time. We started well against Galileo's champions (teams 1241 (Theory 6) from Mississauga ON Canada, 610 (Crescent Coyotes) from Toronto ON Canada, and 1477 (Texas Torque) from The Woodlands, TX), defeating them 199 to 176 in the first match. Alas, we lost the next two and Galileo went on to become FRC Champions for 2013. They were a great alliance and deserved the win.

This was an enormous performance by the team, bringing us to a competitive level which had hitherto been no more than a dream.

FRC and FLL participated in this annual event.

1640's 2nd MAR qualifier. We finished qualifications as 8th seed and accepted 2539's gracious invitation to join the 1st alliance. We made it to the semifinals again. The Team also received the Innovation in Control Award from Rockwell Automation for successful demonstration of our caterpillar drive.

We earned 47 MAR qualifying points at SCH, giving us a total of 80 towards Lehigh qualification.

Our first competition of the 2013 season, and we performed quite well. We finished qualifications as 14th seed in a field of 37 and as a member of the 6th alliance we made it to semi-finals. The team received the Creativity Award sponsored by Xerox. We earned 33 MAR qualifying points.

We are moving to a building generously provided by Eagle Nursery. 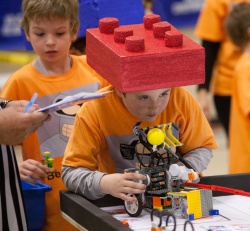 The first alliance teams 271 (Mechanical Marauders, Bayshore NY) and 341 (Miss Daisy, Wissahickon HS, Ambler PA) graciously invited us to join them and together we won Duel on the Delaware in six matches. Our 3rd competition win of the season with Miss Daisy. We had the honor of participating in Miss Daisy's 100th match win of the 2012 season.

FRC Team 1640 co-captain Douglas has been named a Commended Student in the 2012-2013 National Merit Scholarship Program. Douglas is a senior at Downingtown West High School.

FRC Team 1640 and Downingtown East alumna Carly McKown earned membership in Rensselaer Polytechnic Institute's chapter of Tau Beta Pi. Tau Beta Pi is the oldest, most prestigious and most exclusive engineering honor society in America, second only to Phi Beta Kappa in terms of all American collegiate honor societies. College juniors must be in the top-1/8th of their academic class as well as demonstrate outstanding leadership, advanced scholarship, and dedication to ethical service in order to earn a chance of election.