1640 ran three different drive teams at Ramp Riot, giving competition driving experience to all who were interested. We finished qualifications in 8th place (of 30) and were invited by Vulcan Robotics (FRC 1218) to join them in the 2nd alliance. Spike (FRC 293) completed the alliance. We were eliminated in two very tight semifinal matches (an 84-84 tie and a 89-90 loss). Thanks to Vulcan for picking us - we love working with you and it's been too long since we've had the chance! 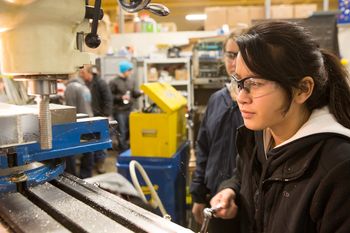 Malia Ashmead mills Aluminum for DEWBOT XI
Malia Ashmead, Sab-BOT-teur during the 2014 & 2015 seasons, has just accepted a position as R&D Engineer at Ethicon, a Johnson & Johnson company. Malia is a University of Florida graduate.

We were very happy to participate in Turn5's Kids Tech Exploration Day with all four FIRST programs. This Tech Outreach event was very well organized and packed with young families. Special thanks to Turn5 for organizing and hosting this outstanding event! At Turn5, 600 Cedar Hollow Road, Paoli.

Alliance Captain at Duel on the Delaware - 19-October-2019

FRC 1640's (Sab-BOT-age's) competition season has started up again (did it ever really end?) with Duel on the Delaware. We had a lot of new students doing new jobs and this worked out very well. We finished qualification matches as 5th seed (of 30 teams) and led the 5th alliance (there's no in-picking at Duel). Our thanks to alliance partners 6226 (Blue Devils) and 341 (Miss Daisy). We were, alas, eliminated in quarterfinals.

Sab-BOT-age was one of ten international FRC teams invited to participate in this elite off-season FRC event in Hangzhou, China.

In addition, while, they did not participate in the 2019 season, two other members of the Sab-BOT-age family graduated as well:

Sab-BOT-age (FRC 1640) finished qualification matches ranked 9th out of 68 teams on Archimedes and ended up as 8th Alliance Captain. Our gratitude and sincere thanks to FRC 271 (Mechanical Marauders), FRC 3015 (Ranger Robotics) and FRC 4391 (Gladstone BraveBots) for joining us in Eliminations. We had a good run, defeating the 1st Alliance 2-1 in Quarterfinals. Alas, the 5th Alliance was simply too good for us to beat in Semifinals - Archimedes 5th Alliance (teams 5406, 930, 1310 & 4004) went on to become Archimedes Champion and FRC Championship Finalist! 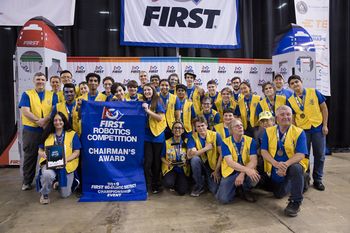 As our 3rd District Event, Bensalem does not affect the team's ranking or prospects of advancing to the FRC Championship. We'd already qualified for the FIRST Mid-Atlantic Championship. This event was primarily intended to provide additional practice for all and an opportunity to improve our control software.

We ended qualifications ranked 6th in a field of 31 teams. That's okay, but we failed to move in one match and experience problems in others.

Our HAB Lift was working and we performed better overall, finishing qualifications ranked 7th of 35 with an (8-4-0) record. We gratefully accepted the 2nd Alliance Captain's (834 -SparTech) invitation. 6327 (The Tin Soldiers) completed the 2nd Alliance, which while barely squeaking through Quarterfinals by the very barest of margins, went on to win the event!. 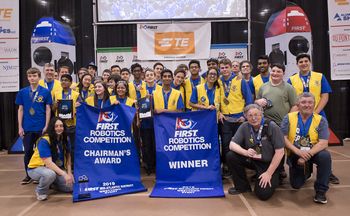 Downingtown Area Robotics had the opportunity to help out our friends and neighbors the Metal Moose with their Westtown RQT. Thanks to the DAR volunteers who stepped up and volunteered for this event!

Clem McKown made an invited presentation of Downingtown Area Robotics and Team 1640 to the board of the Manufacturing Alliance.

The D-Town Dustoff FIRST LEGO League scrimmage was held at the CCIU's Technical College High School Brandywine Campus, 443 Boot Road, Downingtown on Saturday, 10-November.  This was out 7th Dustoff. As always, the Dustoff was run like a Qualifying Tournament to provide teams with a useful practice session prior to their qualifying tournament. Sixteen (16) local FLL teams participated.