Archive of News Articles from 2014 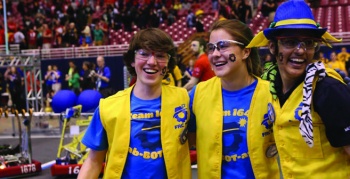 Downingtown's third annual FIRST LEGO League Qualifying Event was held on 7 December, 2013 at the CCIU TCHS Brandywine Campus in Downingtown, PA. This competition was hosted by Downingtown Area Robotics to allow area FLL teams to compete and qualify for the Penn FLL Championship in this year's game, WORLD CLASSSM!


This non-qualifying event was hosted by Downingtown Area Robotics in cooperation with the TCHS to help area FLL teams gain experience and prepare for their Qualifiers in this year's game, WORLD CLASSSM! 15 area teams participated. 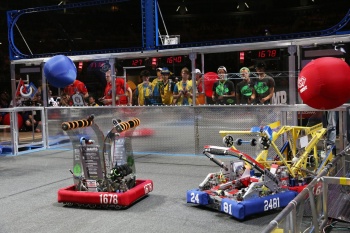 Photographs of FRC 1640 are featured in FIRST's FRC Corporate Sponsorship flyer, FRC University Sponsorship Flyer and Season Recap. In addition, five of the 63 marketing tool photos in FRC's 2014 gallery show DEWBOT X and/or our drive team. One of these is shown at right.

Hosted by team 341 (Miss Daisy) at Wissahickon High School in Ambler PA. Team 1640 has participated at Ramp Riot every year of its existence. This year was an especially good one for teams Sab-BOT-age.

FTC 7314 won the FTC scrimmage, with the help of alliance partner 4433, Smoking Motors.

Held at Salem Community College in Carney's Point, NJ and hosted by teams 365 (Miracle Workerz) and 316 (LuNaTeCs), Sab-BOT-age has participated every year starting 2007.

Sab-BOT-age with DASD School Board President Jane Bertone and Superintendent Lawrence Mussoline
As a consequence of the team's outstanding competitive performance this year, we had the opportunity to present at the Downingtown Area School District's board meeting. While we are no longer affiliated officially with DASD, Sab-BOT-age is a DASD team by birth, and most of our students are from the district.

For two years, FRC 1640's Hannah and Rachael have run Robot Springboard, bringing robotics, lessons to young students and attracting the attention of the US Secretary of Education, Arne Duncan. Their successful program has had international reach.

Team Sab-BOT-age met with the Main Line Kiwanis to discuss our robotics program, the benefits to students and the team's competitive success.

Held at Lawrence North High School in Indianapolis, Indiana 18 & 19 July-2014. Participation is by invitation only and the level of play is simply awesome. Team Sab-BOT-age has participated in IRI every year since 2010; every year of swerve drive for us. 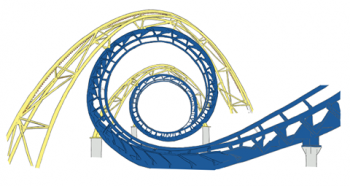 The first MAR Team Day at Dorney Park was held on a beautiful day. In addition to Sab-BOT-age, students from six additional MAR team participated and helped to make this day a success. A big shout out to:

Our all-new drive team and pit crew, together with a new, highly reliable 2-ball high autonomous earned us a 4th seed spot with a (4-1-0) qualification record. We accepted team 869's (Power Cord) invitation to join the 3rd alliance, but were eliminated in a quarterfinals rubber match, losing by 4 points.

Downingtown Area Robotics responded to a request from the office of PA State Representative Duane Milne (167th District) and put together an FRC, FTC and FLL demonstration at Great Valley Middle School.

Mentors and students from MOE visited for a detailed review and examination of Sab-BOT-age's swerve technology.

We've got a record number of graduates this year. These students not only witnessed, but drove a tremendous team transition. As Freshmen, these students were there for 1640's first ever official season victory at Philadelphia in 2011. As Seniors, they were on Einstein as we became FRC Championship Finalists. Congratulations and very best wishes for the future to: 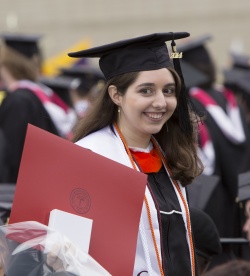 Paul Klufas (DEHS class of '10) received his Bachelor of Science in Computer Engineering from Bucknell University. On team for 2007-2010 seasons; Co-Captain and Programming Lead.

Brianna Edwards (DEHS class of '10) received her degree in Advertising from Temple University. 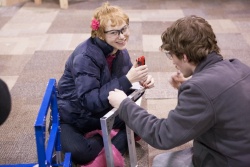 Miranda
It is with greatest sadness that report the passing of 2013 Sab-BOT-age student, Miranda Ram-Nolte on 26-April.

Thanks to alliance partners 1678 (Citrus Circuits - alliance captain), 1114 (Simbotics) and 5136 (Mechapirates), we were Newton Division Champions and Einstein Finalists at FRC Championships. We achieved the hard goal we had set for ourselves nearly a year earlier.

This is an entirely new place for Sab-BOT-age. 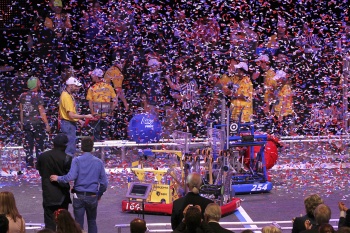 End of Einstein Finals
Another strong performance. Sab-BOT-age completed qualifications as 4th seed with a (9-3-0) record. We led the 4th alliance and while not advancing past quarterfinals, we earned a spot at the FRC Championship.

Big turn-around from Hatboro-Horsham! Our detailed analysis of the shooter failure facilitated an effective correction. 1640 finished qualifications at 2nd seed with a (10-2-0) record. Joining the 1st alliance, we finished the event as FINALISTS. The 56 MAR qualifying points earned secured a spot for us a MAR Championships.

Our performance was seriously compromised by an unanticipated Shooter Failure which was only diagnosed and corrected after the competition. We finished qualifications as 19th seed with a (6-6-0) record. We were the first pick of the 8th alliance, but did not advance past the quarterfinals. We earned just 21 MAR qualifying points at this event.

The deepest, darkest secrets of FRC's 2014 game, Aerial Assist, were revealed to us. There were a few surprises for us. First, we were featured in FRC's kick-off video. Second, Kira and Douglas were prominently featured on the cover of the 2014 season schedule. This media attention is entirely new for us.