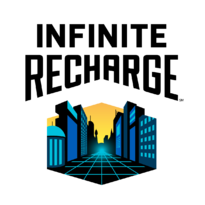 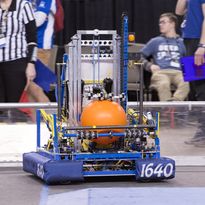 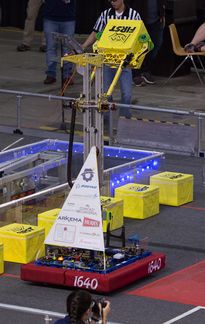 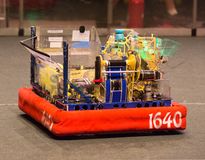 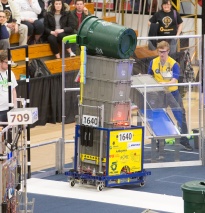 DEWBOT X on Einstein after Finals 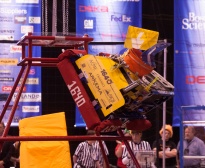 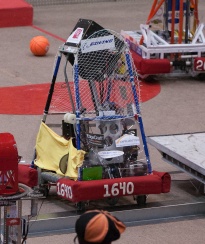 DEWBOT VIII won four 3-on-3 basketball competitions by routinely crossing the mid-field steel barrier to play defense and feed balls forward. It scored bonus points by balancing on a see-saw with one or two other robots at the end of each match. 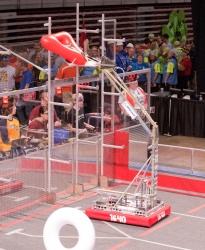 Hanging a red triangle at Philadelphia

DEWBOT VII won two 3-on-3 extreme tic-tac-toe-like tournaments, primarily racing its speedy "minibot" up a pole for bonus points at the end of each match. The robot could also play defense and score a few inner tubes on the tic-tac-toe grid every match, making the triangle-circle-square FIRST logo. 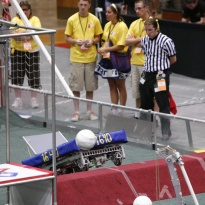 DEWBOT IV won multiple engineering awards for its innovative swerve drivetrain's performance in 3-on-3 soccer. It could hold onto a ball while in a dead spin, cross midfield "bumps", navigate through a short tunnel, and kick goals from across the field. 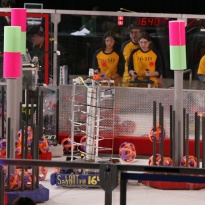 DEWBOT V won the team's first tournament and official award by using a uniquely maneuverable "7-wheel drive" to skate around a slippery field and shoot hollow balls into opponents' trailers, while keeping its own trailer safe from attack. 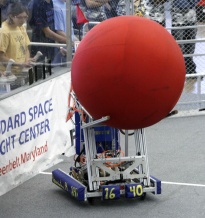 Carly driving with DEWBOT IV in possession of trackball

DEWBOT IV made it to its first finals match ever on a rear-wheel drive, 80/20 fork lift-catapult. We zipped around the field NASCAR-style while hurtling huge yoga balls over a set of monkey bars. Our more gentle fork lift setting was used to place them back on the bars at the end of each match for bonus points.

DEWBOT III hangs a Ringer at Drexel (as Rizzo watches)

DEWBOT III got the team its first turns as alliance captains by snagging innertubes off the ground to play raucous tournaments of extreme cylindrical Connect-4. We spent the matches hanging tubes and blocking opponents and then finished off by driving on top of our allies' ramps for bonus points. 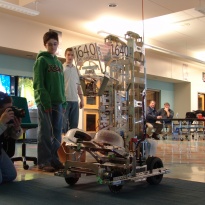 DEWBOT II just prior to shipping

DEWBOT II got us to our second consecutive Ramp Riot elimination bracket by racing around the field, grabbing dodgeballs and "ski jumping" them onto a pitching wheel shooter to score in high wall-mounted goals. 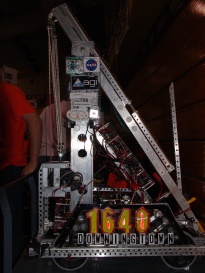 DEWBOT I at Ramp Riot

Our rookie robot, DEWBOT I, was a competent scorer, excluding the high central goal (which it could not reach). A challenging robot to steer, but it drove straight like nobody's business.

We first because a year-round team in 2008, and we don't limit developing new robots to the annual FRC game! Check out some of the many other projects we've done in our off-season hours.

In our first student-only project since something like DEWBOT IV, 1640's students split into two teams and conceptualized and prototyped robots. They endeavored to play our first full-fledged fake FRC game: Touchdown Tango!

In the summer of 2011, we started our first real design classes. Though we didn't have one major robot project, students had a blast with weekly games like our Tower Challenge and "Tennis Ball Tumble".

Though the summer of 2010 was still all about DEWBOT VI, we made several improvements on the road to our first all-star Indiana Robotics Invitational.

Building on our 2008 Drivetrain Development, during the summer of 2009 we managed our first true swerve drive (independently steered wheels). This VEX prototype gave us the experience to try our first FRC Pivot Drive on DEWBOT VI.

After DEWBOT IV, we decided that post-season 2008 would be the era of drivetrain development. With our work cut out for us, we managed 4 different drive VEX prototypes/CAD projects: