The design mechanical asked us to CAD: 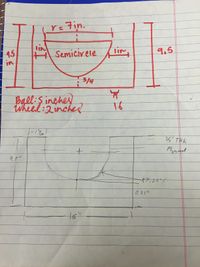 Began design of turret, research done on turret designs. We also decided to mount the shooter on the top of the robot.

The Shooter prototype was cut on the router table in addition to more wheel hubs for the fuel intake.

Mr. Park taught a soldering workshop and trained five of our students in the basics of soldering and electronics. - Madi Wyatt

-We wrote a new class to hold the auton scripts better than last year. It will need to be tested later.

-We added github integration into slack to allow members to be updated about new commits.

-We made good progress on the raspberry pi. Both NTCore and OpenCV are working. Now they need to be integrated together.

The team came in around noon today. Once assembled, we divided into groups. Sam, Braden, Cameron, and Will worked on the shooting mechanism. We have a single wheel spinning with a half circle under it. The ball falls into the half circle and is then launched out the end in the direction of which it came and to the tower. They worked on smoothing out the curve that the ball falls on and figuring out the ideal speed for the shooter. After we completed the shooter prototype, many members of the team came to watch as we experimented with different field conditions. As a team, we are still in the process of deciding whether we want to use a turret, and whether we want the shooter to change speeds or angle depending on distance from the target. We are working on prototypes and running scenarios for each of these possibilities. We experimented with keeping the speed steady and moving the shooter’s angle, and tested how the shooter reacted to balls being placed in different areas and from different heights. Once the shooter was fine-tuned, we were able to score most of the balls, but we are still working on being able to successfully shoot balls in rapid succession. Doug worked on a prototype ball hopper. The storage for the fuel for this year’s game is currently being prototyped using a game tote from the 2014 competition season. The tote has a ball-sized hole in the side, and the concept is to have conveyors on the bottom that push the balls to one side, out the hole, and into the shooter. Both Josh and Josh were working on the ball intake. They were working with the cords and the backing to try to find the best grip and strength, as well as figuring out how to pick up the largest number of balls, keep space usage down, and making sure none of the balls would get caught in the system. The cords are what is holding the Around 3:00, we had our first official team meeting, where we were formally introduced to our co-captains, and discussed what our teams goals would be for the year. After the meeting, we broke back into our groups. Eric and Connor, along with Mrs. McKown, one of our mentors, worked on building the gear drop. This field piece is very important for our prototyping because we have many ideas for how to best hold the gears, but without the drop there is no way to properly test how the prototypes will catch the gears. Once we have the gear drop, we can start to more accurately rule out some of the gear holder prototypes.

Scouting (past week): We determined the majority of the questions we want to ask in our scouting app. We still need to decide on how we track fuel scoring (both high and low), and whether we want to track position in auton.

Scouting App (past week): We decided to reskin ScoutMobile 2016 instead of continuing with Espionage. We wrote functions that allow us to write java instead of xml. Also started building auton.