On Saturday 18 roboteers headed down to the Mi-Atlantic VEX Championships in Westminster MD. We met up with teams from MA,NJ,PA,MD,VA,NC to compete in the middle school division. A total of 23 teams participated. 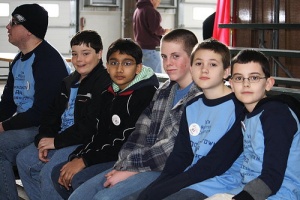 Our teams did very well. Team 80 struggled with driving early in the day but came back to place #3 in the rankings. After their great showing at DockBot'10 Team 81 had a great day, placed 5th and was chosen by the second place alliance. The Pterodactyls, Team 82 was one of the Cinderella stories of the day. The mechanical team did not come, but Taylor the team programmer did. He and mentor Dan made some minor hardware changes and some major programming changes to post an impressive record. Using borrowed arm operators Taylor made it into the semi-finals.

The Iron Taco's, Team 94, came ready to play and posted some upsets against much higher ranked teams. Team 89 Govonador, also had a good day. They made adjustments and programming changes and ranked in the top teams. Team 90 posted some solid results as did Team 92. These two robots went through some early mechanical changes but towards the end were solid performers.

Team 96 suffered from missing team members, but Corey kept the code flying and the robot rolling and placed 8th in the qualifications. 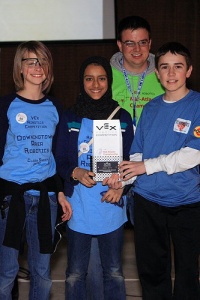 Because of the large number of teams it was easy to say "Downingtown Wins" at the end since we were in most matches. Two of the matches of the day were all Downingtown teams.

Alliance selections went well with three of our teams being alliance captains. We had good alliance parters during the eliminations. Team 89 had the upset of the day beating the #1 alliance in their first match.

While we had a number of teams that made it as far as the semifinals, we didn't make it into the final rounds. But we did win some major awards:

By winning the Programming Challenge, Team 80 is eligible to go to the World Championships in April!

Thanks to all the roboteers that went and to the parents that not only drove but then mentored for the long day.