CrossBot is a simple VEX game. It is played on a plus shaped field with 40 tennis balls and two scoring tubes for each alliance. 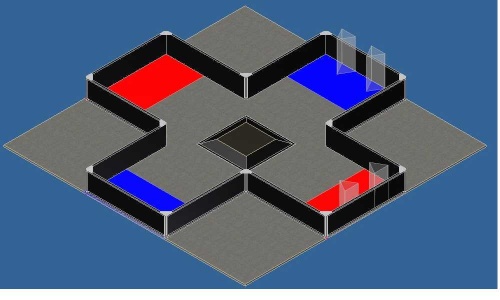 The game starts with both robots in their starting wing (the ones without their scoring goals.) and 15 balls. The remaining 10 balls are stacked on the center platform.

Balls that are moved across the field to the scoring zone. Balls on the floor are worth 1 point. Balls that are in the goals are 2 points each. At the end of the two minute match if the robot is on the clear top of the center ramp that is worth 5 points. Balls may be moved in or out of a scoring zone by either team.

This is the summer 2010 game, it allows simple and complex robots to play and score.