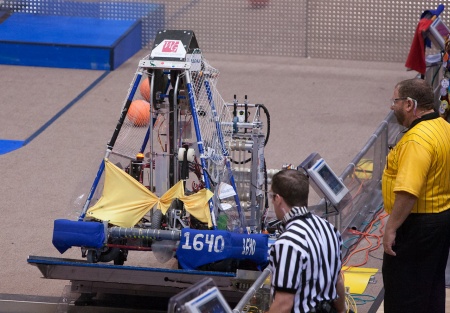 Mounting briddge with 2056
20 and 21-July-2012 at Lawrence North High School in Indianapolis, IN. This is our 3rd consecutive year of participation in the Indiana Robotics Invitational (IRI)! The most selective of all off-season competitions, IRI invites 76 (70 attended) of the absolute best 2012 team from around the world (though primarily from US and Canada).

Downingtown Area Robotics made the long (but fun) drive to Indianapolis on Thursday by team caravan and by bus with teams 341 and 1676.

Our now-veteran drive team did a bang-up job and kept pace with even the best team at the even, thanks to our awesome scouting crew. Full accounts of the DEWBOT VIII IRI Matches cover the details of who we played with and the results. We spent a lot of time on the practice field, mostly working on autonomous until we discovered the code error that fixed it.

The Friday evening meal was served by the host teams, macaroni and cheese and chicken with cupcakes. After dinner, some members we stayed for the fabulous mentalist show and concert while others headed out to prep for the next day.

We did a great Saturday morning as well, winning 2 of our 3 matches, with one of the top 5 highest scores at the event and the 3rd highest differential (113-39).

The robot's starting to show its age, and we lacked some consistency in matches due both to the autonomous code error (reading the sonar during autonomous) and repeatedly losing the beaterbar drive and jamming the lift belt. This made pickup painful and caused us to jam the lift a few times. Fortunately, drivers are getting close to maxing out robot capabilities and are also strong tactically and strategically in the back court. We pulled off a phenomenal 13th of 70 at the most selective field after Einstein. Fortunately, the repairs were relatively minor at the event (fortunate because our pit captain, Molly, was ill).

After the awards, the team stuck around to help disassemble and pack up the field some before decompressing at a local park and then heading to Dave & Busters, where Team 341 invited us to dinner. Thanks again 341!

Other pages about the DEWBOT VIII Indiana Robotics Invitational