FRC Team 1640 (Team Sab-BOT-age) had an awesome weekend at Hatboro-Horsham's week 1 Mid-Atlantic District Event. A lot of pressure: things didn't work right or reliably and for the vast majority of Sab-BOT-teurs, this was their first official FRC competition. That said, 1640 finished qualifications ranked #2 (out of 35 teams) and Captained the 2nd Alliance (originally comprising ourselves, 1807 - Redbird Robotics, and 2180 - Zero Gravity) during playoffs. The pit worked absolute magic to keep everything going. We got through Quarterfinals and Semifinals with a (4,0) win-loss record, but in the final seconds of the 2nd Semifinal match, DEWBOT fell from the 7' high TRANSVERSAL RUNG. Ouch! That fall killed three of our swerve drives and put us out of the game. Back-up Bot 5113 (Combustible Lemons) filled our place on the field, but we were, alas, eliminated in Finals by the 1<supst</sup> Alliance.

1640 went home with the Finalist Award and the Industrial Design Award (sponsored by General Motors). Team 1640 earned 61 District Points, putting us (for the moment) in 3rd place (for the moment) in FMA after 5895 (Peddie) and 2539 (Krypton Cougars).

The entire team did a really great job. We've got our work cut our for us healing DEWBOT's wounds (and making improvements) before our next competition at Springside Chestnut Hill Academy in less than 2 weeks!

It was really good to get back to an in-person robotics competition after the 2-year COVID-19 interregnum. 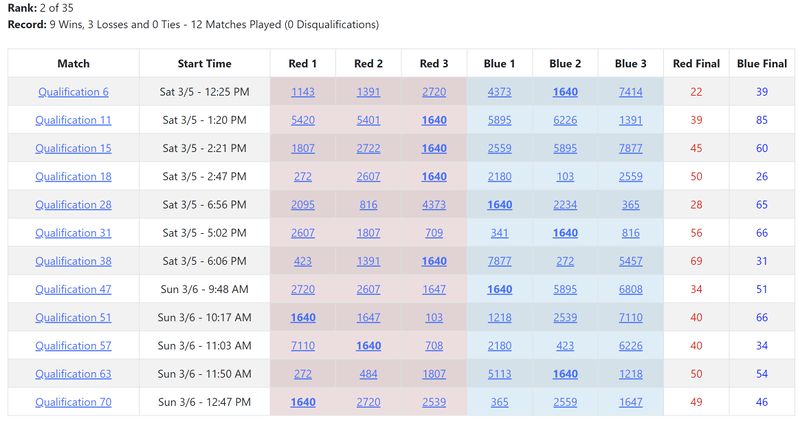