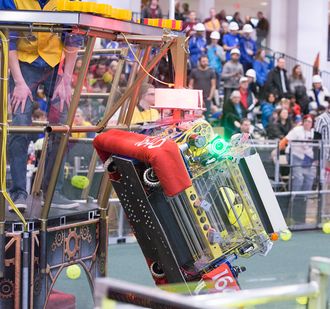 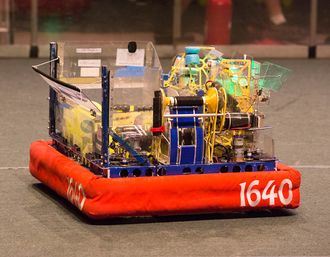 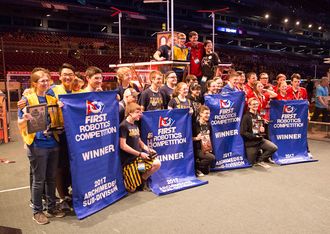 Some notable 2017 achievements are:

Just look at the scoring of this game. A lot of big-ticket ways to score: Rope Climbing (50 pts); Starting a Rotor (40 pts in teleop, 60 in autonomous); plus (1) ranking point in qualification matches or 100 pts in eliminations for four rotors turning!

Then there's the fuel scoring. Almost a joke in comparison. 1 point (kPa) for each ball scored in the high-efficiency goal in autonomous, dropping to 1/3rd point (kPa) in teleop. 1/3rd of the above for scoring in the low-efficiency goal. Scoring 40 points (kPa) earns a ranking point in qualifications or a 20 pt bonus in elimination, but this seems quite asymmetric vis-à-vis rotor scoring considering the difficulty. Is fuel scoring for suckers?

But wait. All of the above scoring is both highly quantized and intrinsically capped. Most alliances will get the autonomous mobility points (15) and will score (1) rotor in autonomous. In the match, either three (easy) or four (hard) rotors will end up spinning. If all three robots don't climb, you've got a tough time winning. So scores of 305 (3-rotors; one in auton) and 345 (445 in elims - 4 rotors; one in auton) are going to be pretty common. The only ways to break this impasse are scoring (2) rotors in autonomous (+20 points) and/or with fuel. And (like two hikers being chased by a bear), you don't need a huge fuel score, just more than the opposition's.

Westtown - 10-12 March-2017
The Westtown event is co-hosted by teams 1391 (based at the Westtown School) and 1640. Steve Compton (1391 Head Mentor) serves as Event Coordinator, while Clem McKown (1640 Head Mentor) serves as Volunteer Coordinator. This was our 2nd year of co-hosting this event and our experience showed! This event ran much more smoothly than last year's.

This was 1640's first SteamWorks event. How did we do? Okay, but not as well as we imagined. We finished qualifications in 18th (of 31) with a 5-7-0 record; not impressive. We got 4 rotors running in one qual match, though, and we finished as semifinalist and received the Innovation in Control award for our CVT swerve design & control strategy. We earned 33 points towards MAR qualification and Meghana became a Deans' List semifinalist!

MidKnight Mayhem - 17-June-2017
Sab-BOT-age finished qualifications ranked 4th. We accepted Nemesis' invitation to the 3rd alliance and Velocity completed our alliance. Alas, we were eliminated in quarterfinals by the 6th alliance, who went on the become champions.

Techgirlz Robotics Workshop - 23-Sept-2017
Downingtown Area Robotics hosted its second Robotics Workshop in cooperation with Techgirlz. Thanks to Laura and Akhila for organizing and planning this event, and also to Sai and Meghana for instructing. Once again, a great success and a lot of fun.

Team Sab-BOT-age is what it is only due to the efforts of the people involved. DEWBOT XIII's success will be in the hands of the students, mentors and parents engaged. The team's very existence is possible only through the gracious generosity of our sponsors.