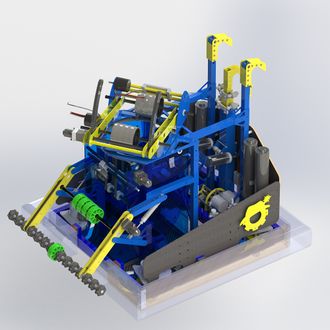 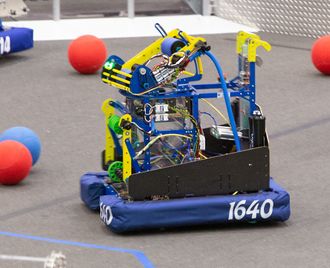 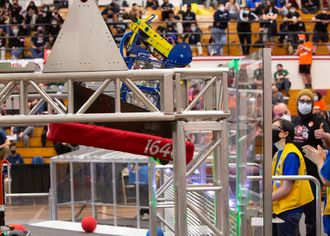 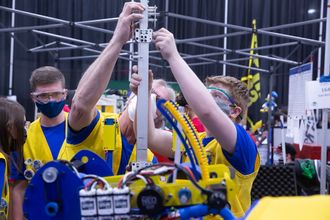 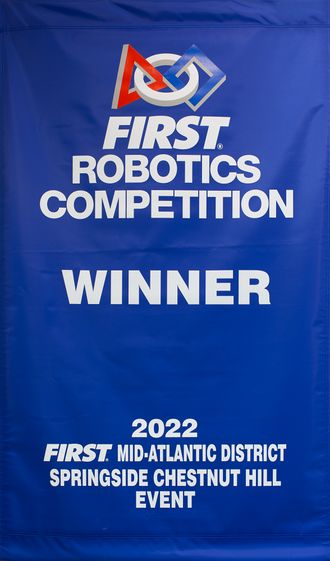 Some notable 2022 achievements are:

The very heart of the robotics season. It's great to be building robots again. But will we still remember how? Have we lost too much institutional knowledge? Are we worthy?

I guess we'll find out in March & April.

DEWBOT XVII was ethically sourced. No students were harmed it its manufacture (yet, at least).

FMA District Hatboro-Horsham Event - 4-6 March-2022
FRC Team 1640 (Team Sab-BOT-age) had an awesome weekend at Hatboro-Horsham's week 1 Mid-Atlantic District Event. A lot of pressure: things didn't work right or reliably and for the vast majority of Sab-BOT-teurs, this was their first official FRC competition. That said, 1640 finished qualifications ranked #2 (out of 35 teams) and Captained the 2nd Alliance (originally comprising ourselves, 1807 - Redbird Robotics, and 2180 - Zero Gravity) during playoffs. The pit worked absolute magic to keep everything going. We got through Quarterfinals and Semifinals with a (4,0) win-loss record, but in the final seconds of the 2nd Semifinal match, DEWBOT fell from the 7' high TRANSVERSAL RUNG. Ouch! That fall killed three of our swerve drives and put us out of the game. Back-up Bot 5113 (Combustible Lemons) filled our place on the field, but we were, alas, eliminated in Finals by the 1st Alliance.

1640 went home with the Finalist Award and the Industrial Design Award (sponsored by General Motors). Team 1640 earned 61 District Points, putting us (for the moment) in 3rd place in FMA after 5895 (Peddie) and 2539 (Krypton Cougars).

The entire team did a really great job. We've got our work cut our for us healing DEWBOT's wounds (and making improvements) before our next competition at Springside Chestnut Hill Academy in less than 2 weeks!

It was really good to get back to an in-person robotics competition after the 2-year COVID-19 interregnum.

FMA District Springside Chesnut Hill Academy Event - 18-20 March-2022
1640 finished qualifications as 1st seed and formed the 1st alliance with teams 341 (Miss Daisy from Wissahickon High School) and 714 (Panthera from Technology High School, Newark NJ). 341 was the 2nd highest scorer after ourselves. We had identified 714 as our first choice for 2ndpick. With a field of 28 robots and with our 2nd pick being the 24th alliance assignment, we were thrilled to get our 1st choice. The 1st alliance was a power to be reconned with. The 1st alliance went undefeated through playoffs.

In addition to winning, 1640 received the Industrial Design Award (again).

Team 1640 earned 73 District Points at Springside Chestnut Hill. Overall we now have 134 District Points, putting us (for the moment) in 1st place in FMA. There are still three District Events pending and this ranking is very likely temporary.